With vaccination rates increasing steadily across both the United States and Britain, stories about dusting off our social skills and reacquainting ourselves with each other are making routine appearances in the news.

It seems strange at first, to think that we’ve fallen so far out of the social practices that we’d need to rebuild our abilities to interact with each other, but the fact is, the world is a different place. The pandemic has affected us all, in different ways – and those are bleeding into the workplace in unexpected ways.

We’ve already discussed the expanded roles employers need to embrace with respect to employee mental health and wellbeing – driven both by necessity and by employee demand. However, what leaders also need to consider as they craft the plans for their workplaces, whatever that means for the organisation, is the important social aspect of work.

It’s the easiest thing in the world to overlook, but office culture, and the friendships that spring up between employees, are impactful. Prior to the pandemic, for many people, the office was, in fact, the primary social outlet.

It’s little wonder, then, that people are lonely, and growing more so.

Loneliness was rising before the pandemic

Loneliness is not a new trend. A pre-pandemic survey done at the end of 2019 found that 61% of Americans are lonely, up seven percentage points from 2018. At that time, survey respondents said the reasons for their increasing loneliness included:

The effects of the pandemic have exacerbated these issues, further limiting social interactions and layering on a host of new stressors. According to the 2021 State of Remote Work report from Buffer, loneliness is the second-largest struggle remote employees face, behind the inability to unplug, which itself contributes to loneliness by reducing work/life balance. 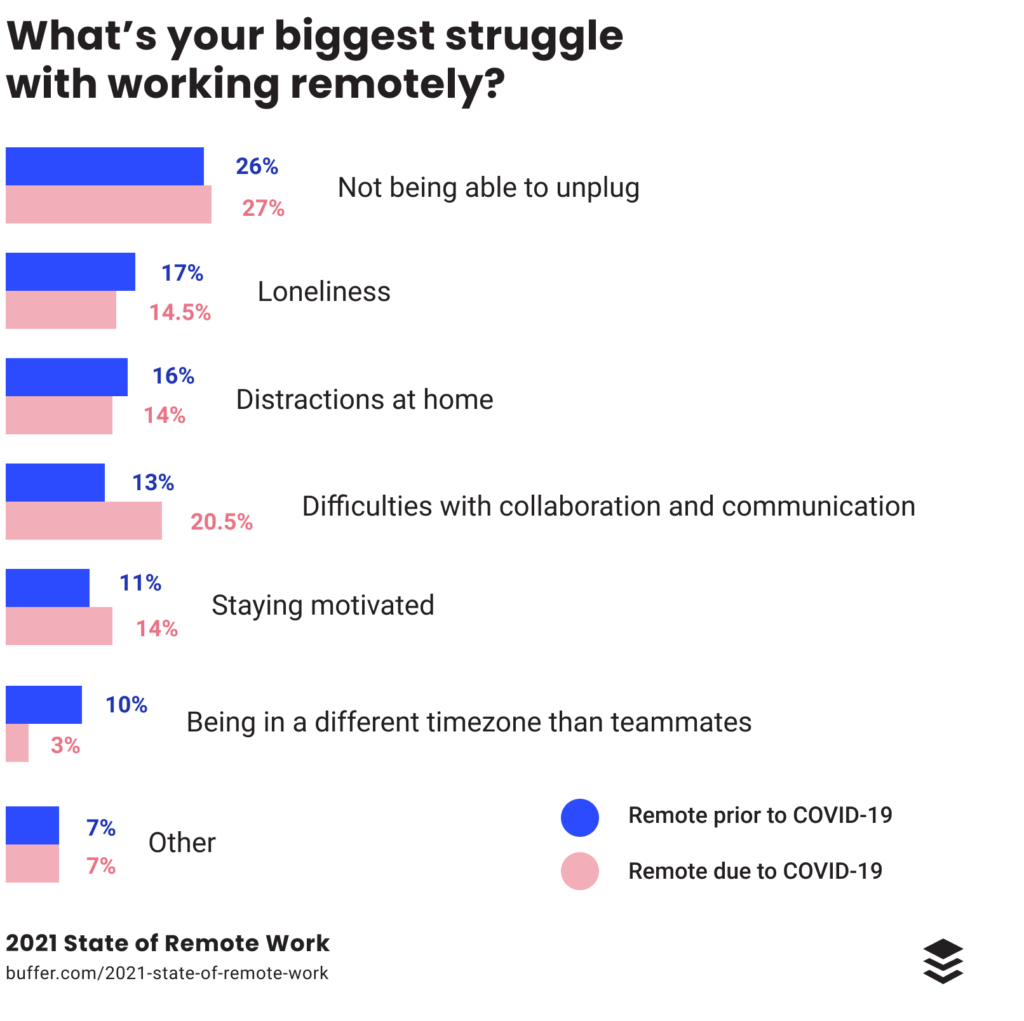 Loneliness has a definite impact on people’s performance at work, according to the same 2019 survey cited above, which found that lonely workers say they are less engaged, less productive, more likely to miss work, and at an increased chance of leaving the company. Unsurprisingly, remote workers were more likely than non-remote workers to say they always or sometimes feel alone.

Recognising that some of your own employees may be experiencing loneliness is the first step. Figuring out how you can help them is the next. While some leaders may still consider personal circumstances to be wholly separate from one’s life at work, they are likely to be in the minority. Remote work has blurred the lines between our work and home lives, and employees are increasingly expecting support from their employers that would have been unimaginable just a few years ago.

With more than a year’s experience under our belts, the opportunity for using what’s been learned to revise how we work and interact with others is at hand. Here at Engagement Multiplier, we’ve been through several iterations of meeting formats, which have helped us avoid “Zoom exhaustion” and have actually increased the connection and collaboration between our teams in the US and UK. However, we’re still picking away at this, and in fact, are going to be asking the team for their feedback on this topic in the coming weeks.

“We are on the cusp of a reset. How often in life do we get a do-over?” asked Susan McPherson, author of The Lost Art of Connecting: The Gather, Ask, Do Method for Building Meaningful Business Relationships, in a recent article for Fortune. “Now we have the ability to go forth knowing how important, how vitally necessary having hugs and meaningful deep conversation is, to gather in groups outside of existing family. We also know the power of technology, good and bad. We have the chance to do it right.”

Routine check-ins are increasingly important, but there’s more to it than simply ticking the box by having regular 1:1 meetings. Leaders at all levels should be making an effort to engage employees in discussions about how they’re really doing, and be prepared to share some of their own related vulnerabilities. Asking for feedback on whether things like meeting format or support from a manager are really working for an employee can be a great conversation starter, encouraging the employee to discuss their situation, and how they’re really doing, more candidly.

Enable people to reconnect socially by carving out time for people to simply connect. It can be as simple as setting aside time every week for people to simply have a coffee together, and catch up. Other ideas we’ve seen include virtual yoga sessions to get people moving, “walking meetings” in which people go for a walk outside while talking, random acts of kindness challenges, book clubs, happy hours, or even team poetry slams.

If your organisation is bringing people back into the office, even as part of a hybrid schedule, investing in creating social connections is wise – remember, people said they were lonely even before the pandemic began. Creating fresh opportunities for them to collaborate and socialise can help people form new connections. One client of ours went as far as to create “collaboration days,” in which the team devoted a full day to resolving long-standing issues within the business – an exercise that proved very satisfying for the team and opened the door to new innovation for the company.

Combatting loneliness may not be on your organisation’s radar screen, but it should be. In addition to contributing to workplace performance, loneliness also impacts peoples’ mental health. If your organisation values a healthy culture and engaged employees, taking action to reduce loneliness amongst your team is a worthwhile endeavour. 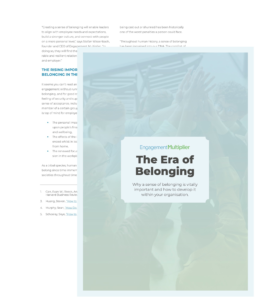 White Paper: The Era of Belonging

Workers are looking for an increased sense of support and inclusion in the workplace and to aid in that, we’ve released a white paper on belonging in the workplace. Learn why belonging is so vitally important for businesses to thrive and how to develop it in your organisation. Download our white paper “The Era of Belonging” here.

How is your team really doing? Our Mental Health & Wellbeing survey will help you find out.

The Leadership Perception Gap On-Demand Survey: Do Your Employees Trust Their Leaders?